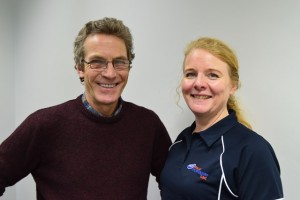 Mike Richardson, skiing instructor and skiing equipment specialist at LD Mountain Centre, badly twisted his knee while he was skiing in Austria at the end of October.

Although the injury occurred at the end of a two-week trip, he was struggling to put weight on it and it looked set to ruin the rest of his winter.

Karen Dearden, from NSIC, offered to help Mike in a bid to help him fulfil his work commitments for the winter – although she suspected a torn meniscus, it was also important to confirm that he had not torn or damaged his Anterior Cruciate Ligament (ACL), which would have been a far more serious injury.

In order to rule out an ACL injury, Newcastle Clinic carried out a scan using its open-sided MRI scanner. Newcastle Clinic is able to offer scans and deliver diagnoses much faster than the NHS can – meaning Mike’s treatment could start much more quickly.

The scan results confirmed Karen’s suspicions – a torn meniscus – and also confirmed that Mike’s ACL had not been damaged.

Karen said: “In Mike’s case, time was of the essence. In order to treat his knee correctly, the exact nature of his injury needed to be confirmed. ACL injuries can be difficult to detect the longer time passes after the injury.

“We work closely with Newcastle Clinic and were able to get Mike’s scan results very quickly. We can now start his treatment and progress his rehabilitation, hopefully get him skiing much sooner than would otherwise have been possible.

“This is a good example of our entire approach to injuries – we establish the cause and the problem, rather than just treat the symptoms. Taking the wrong approach with Mike’s knee could have caused more damage in the long-term, so it’s vital to carry out the correct diagnostic checks.”

Mike, who has been a ski instructor for over 30 years, has various jobs lined up for the next few months, including testing next year’s skis in February as part of his job at LD Mountain Centre.

Now he says he is ‘over the moon’ at being able to fulfil his work commitments.

“Getting the scan results back was a massive relief. An ACL injury would have required surgery and ruled me out for a long time, so having that confirmed has been great. After only the first session with Karen I saw immediate results and feel much more positive that this season will not be a write off and I’ll be able to come back stronger than ever thanks to NSIC.

“Working with NSIC and Newcastle Clinic has reduced my recovery timescale by months and I am hoping to be able to ski again sooner rather than later.”

Shaun Fryer, managing director at Newcastle Clinic, said he was pleased to be able to help Mike to access a diagnostic MRI scan so quickly.

He said: “The NHS battles with long waiting lists and is not able to prioritise non-emergency patients. However, to Mike, this was an emergency as it was going to affect his life significantly for the next five months.

“We have a close working relationship with Newcastle Sports Injury Clinic and were delighted to be able to help them diagnose Mike’s injury quickly.

“We hope he is able to get back on the piste as quickly as possible.”