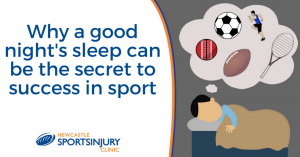 Most of you probably don’t get enough sleep. And while some people wear that as a badge of honour, the reality is that the value of sleeping well is seriously underestimated. Research shows that adequate sleep can significantly improve almost every aspect of not only your sports ability, but your general well-being and health.

Here are some of the main ways sleeping well can improve your athletic ability:

Getting adequate sleep is essential to repairing and growing damaged muscles, and failing to sleep well after a hard day’s training can undo the gains you’ve made. This is because 80% of human growth hormone’s (HGH) production occurs only during sleep, so if you’re failing to prioritise your sleep then your muscles won’t be adequately repaired. This will lead to more injuries, and failure to reach your potential.

Practice makes permanent – and sleeping well helps achieve this. Memory consolidation occurs during sleep, which is the process of recently-acquired information being transformed into more permanent long-term memories. This includes the simulations you’ll experience while training, so if you’re sleeping well, you’ll find it easier to replicate what you’ve learned in training during a real event.

Take a nap to improve your reaction time

Even a quick nap is proven to significantly improve an athlete’s performance for a few hours. Research by NASA found that their pilots’ performances increased by 34%, and their alertness by 100% in the hours following a short nap. When the margins between success and failure can be miniscule in competitive sports, those percentage increases are too significant to ignore – especially the 100% stat!

NBA legend Steve Nash relied on the power of napping throughout his career, stating that “If you nap every game day, all those hours add up, and it allows you to get through the season better.” Steve was the oldest active NBA player at the time, and perhaps all that napping is why he remained so injury-free and active when other players his age were having to retire.

When someone like three-time Tour de France winner Chris Froome says that sleep is “almost as important as diet and training time on my bike”, you take note.

The benefits of getting enough sleep are seriously underestimated. If you want to give yourself the maximum possibility of succeeding in your chosen sport, then it’s vital to start taking the importance of good sleep more seriously.

The slipped disc – Can it be managed osteopathically?

The slipped disc – Can it be managed osteopathically?